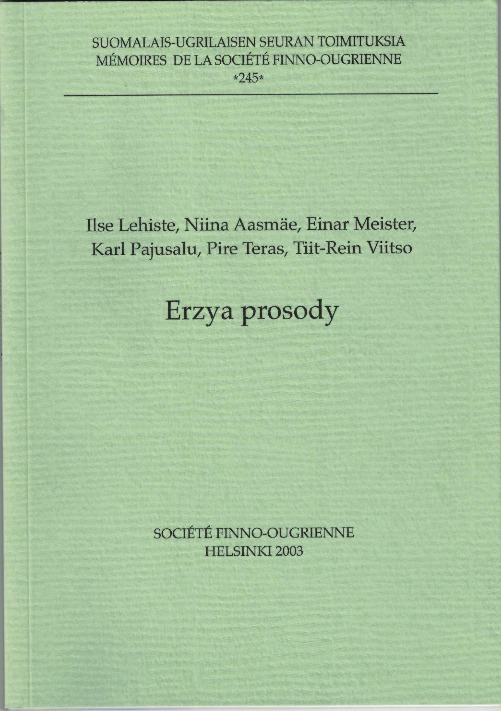 The position of Erzya among the Finno-Ugric languages has been considered to be exceptional in many respects. Its grammar is extraordinarily rich in complex suffixal forms and morphosyntactic categories. Erzya is the language with the smallest vowel inventory in the Finno-Ugric family (cf. Zaicz 1998). One of the most mysterious research prob1ems concerning Erzya is its prosodic system. As a rule, Finno-Ugric languages have fixed word stress; Erzya is claimed to have free stress, and some linguists have argued that there is no prominent word stress in Erzya at all. According to a widely accepted point of view, Erzya has neither contrastive quantity nor tone. To be sure, it has to be taken into consideration that acoustic measurements concerning the sound system of Erzya have been scanty up to now. The main purpose of this book is to provide researchers with new, accurate data about the phonetic characteristics of Erzya prosody that might facilitate solving the old mysteries of Erzya prosody.

Moksha is a close linguistic cognate of Erzya; together they are traditionally seen to constitute the Mordvin language(s). But Erzya and Moksha differ in many respects, including word stress. The Mordvin languages that are spoken in the center of the Finno-Ugric language territory have been assigned a key position in several discussions concerning the historical development and typology of Finno-Ugric languages. This is true regarding prosodic phenomena such as word stress as well.

The only three Finno-Ugric languages the sound systems of which have been systematically described are Finnish, Estonian, and Hungarian. The basic characteristics of their prosody are surprisingly similar (cf. Ross and Lehiste 2001; Abondolo 1998). They all have phonological distinctions between short and long phonemes and no tonal contrasts that are independent of other prosodic features. They are all characterized by fixed word stress that does not, as a rule, distinguish between lexical and/or grammatical meanings. In native vocabulary, primary word-level stress is assigned to the first syllable, and secondary stress to successive odd-numbered syllables. Because of the phonemic quantity contrast, stress is not manifested by lengthening of the stressed syllable. Differences in vowel quality between stressed and unstressed syllables are relatively insignificant, and tone is not independently contrastive (although it plays a part in distinguishing between long and overlong quantities in Estonian). All these languages have dynamic word stress, characterized by greater intensity and loudness of the stressed syllable.

There are, however, differences between the prosodic systems of Estonian, Finnish, and Hungarian. In Estonian, long vowels occur only in syllables with primary stress – the first syllables of words. There is also a difference in the inventory of vowels that can occur in word-initial syllables and in other positions in the word: all nine vowels (and most of the numerous diphthongs) occur in the first syllable, while only a very restricted set of syllable nuclei can appear in non-first syllables. Thus it is possible to predict the position of primary stress on the basis of several prosodic and distributional properties of the syllables. Stress can be found on non-initial syllables in foreign words, and it can shift to non-initial syllables in some southern dialects as a consequence of cliticization (Viitso 1990). In Hungarian, sentence stress rules of many types can influence the location of word stress. In fact, Finnish appears to be the most stable with respect to maintaining word-initial primary stress. But there exist complicated rules of the placement of secondary stress, which depend on the structure of non-initial syllables, such as the length and sonority of the syllable. Our goal is to provide data for Erzya that would make the Erzya system comparable to the better-known prosodic systems of Estonian, Finnish and Hungarian. The material offered in the present book constitutes a first step in this direction.

The book contains two main parts. In the first part (Chapter 2), previous studies of the prosody of Erzya are surveyed. The chapter focuses on earlier acoustic analyses of Erzya prosodic features, treatments of Erzya phonology, and diachronic and typological studies of Mordvin in general and Erzya in particular. The objective of this review is to bring forward research questions relevant to solving the puzzle of Erzya prosody.

The second main part of the study (Chapter 3) presents the results of our experimental research. The analysis concentrates on the role of quantity and stress in the Erzya prosodic system. The duration of sounds, the acoustical structure of vowels, and the fundamental frequency are measured in a corpus of test sentences. (Details of the measurements are included in the Appendix 3). Primary attention is directed toward the description of differences between stressed and unstressed syllables occurring in phrase-final and sentence-final positions. The location of stress was determined by a native speaker of Erzya (Niina Aasmäe) and by a trained phonetician who is also a native speaker of Estonian (Ilse Lehiste). The cases where there was a difference in the opinions of the two listeners are treated in some detail. The main problems discussed in the chapter are related to the nature of Erzya word stress:

(a) If there is no quantity contrast, are differences in duration used to signal word-level stress?

(b) If vowel reduction is found in Erzya, is vowel quality an indicator of the position of stress?

(c) Is there a difference in fundamental frequency between stressed and unstressed syllables?

(d) If there is dynamic stress in Erzya, how is it related to sentence intonation?

In the concluding chapter (Chapter 4) we compare, from a typological point of view, the results of our acoustic analyses with previous statements concerning the prosody of Erzya. We are also looking for an answer to the question to what an extent and in which sense the characteristics of Erzya prosody resemble those of the Finnic languages and Hungarian. We are aware of the fact that our research is only a provisional attempt to describe the regularities of the Erzya prosodic system, but we hope that it will provide a perspective for other researchers to follow.