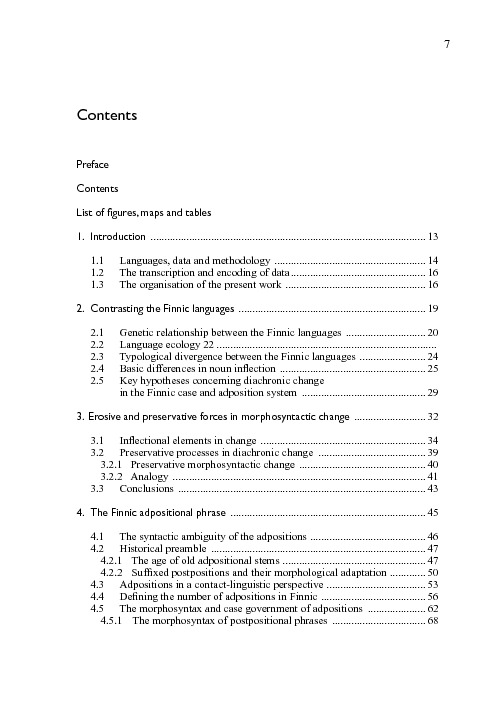 The Finnic adposition and case system provides a limited empirical framework for the discussion of various synchronic relations and diachronic processes in language. The following questions emerge from the data that illustrates the interdependence between form and function in the Finnic adpositional phrases and case system: How should one account for the typological divergence between genetically related languages? Do diachronic processes transfer morphosyntactic properties or patterns and are they conditioned by endogenous or contact-induced innovations? What is the relationship between language-specific and more universal tendencies? These problems are discussed from the viewpoint of language typology, diachronic change and language contact.

Special emphasis is laid on the morphosyntax of Livonian and Veps, two seriously endangered Finnic languages. The individual studies include a more detailed analysis of the Finnic adpositional phrase with special reference to Livonian, the development of Veps local case system and the role of language contact in the development of the Southern Veps prolative-comitative and Livonian translative-comitative case suffix.

Conclusions on a more general level and observations on the diachronic morphosyntax of individual Finnic languages are made on the basis of the analysed data. The empirical evidence suggests that there are at least two different and in many ways opposite general principles of morphosyntactic change, namely an erosive and a preservative type of change. Both of them plays a significant role in diachronic change and has a strong influence on synchronic grammatical relations. The conclusion is that language change is not irreversible nor unidirectional or uniform.

The re-establishing of a tri-partite local case system in Vepsian shows a tight interdependence between form (local case) and function (spatial relations) in morphosyntactic change. Likewise, the interaction between form and function is seen in the morphosyntax of Finnic adpositional phrases that display three different types of adpositions: exclusively prepositions, exclusively postpositions and bipositional adpositions than may occur both in a pre- and postnominal position. The Livonian postpositional phrase illustrates a strongly eroded construction that, however, appears to be resistant against the influence of language contact. The analysis of two cases, the Southern Veps prolative-comitative and the Livonian translative-comitative, that display two clearly different functions each, shows the interaction of endogenous and contact-induced forces.

Finnic adpositions and cases in change